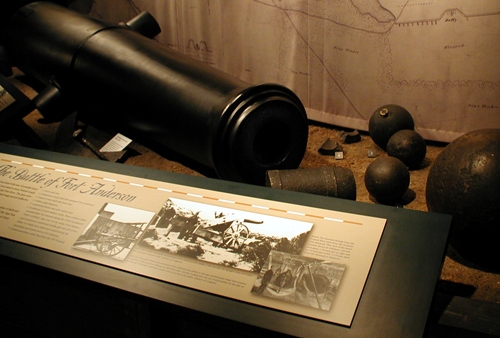 A major pre-Revolutionary port on North Carolina's Cape Fear River, Brunswick Town was razed by British troops in 1776 and never rebuilt. During the Civil War, Fort Anderson was constructed atop the old village site, and served as part of the Cape Fear River defenses below Wilmington before the fall of the Confederacy. Colonial foundations dot the present-day tour trail, which crosses the earthworks of the Confederate fort.

St. Philips Church is the most remarkable structure at Brunswick Town/Fort Anderson, because it is the only above ground structure that is still partially intact. The history of St. Philips Church at Brunswick Town is long and winding. It took many decades and a great deal of effort to build St. Philips Church.The church remained unfinished by 1759, when a lottery was held to raise money to finish the Brunswick and Wilmington churches. Unsuccessful, another lottery was held for the same purpose in 1760. This effort apparently succeeded, and a roof was erected on St. Philips, only to be destroyed by lightning during a summer storm shortly thereafter. The building seemed ill-fated, for after its final completion in 1768, it was set ablaze by the British in 1776, seeing only eight years of occupancy. The walls of St. Philips remained intact, but were fired upon during the siege of Fort Anderson. Amazingly, they survived the battle unscathed. The magnificent ruins of the church still stand, a testament to visitors of their colonial past. The site is also the final resting place for royal governor Arthur Dobbs and the infant son of royal governor William Tryon.

Russellborough was one another of the most notable structures at Brunswick Town/Fort Anderson because it was the residence of two royal colonial governors. Originally built by Capt. John Russell in 1751, this two story house between Brunswick Town and Roger Moore’s Orton Plantation was christened Russellborough. Incomplete when Russell died in 1753, the property was later sold to Gov. Arthur Dobbs in 1758. In order to entice Dobbs to move to Brunswick, the town decided to sell the estate for one shilling per acre and one peppercorn. Because peppercorn could not be harvested until the following year, this move guaranteed that Dobbs would stay at least one year. Dobbs moved to Brunswick from New Bern, N.C., presumably to escape high rents and rampant disease. Believing that Brunswick Town would provide a marked improvement, Dobbs bought Russellborough and renamed it Castle Dobbs.