Melynda Dovel Wilcox said it best in a 1992 Kiplinger Personal Finance Magazine article entitled "Retirement Spots That Feel Like Home." About the Southport-Oak Island Area she wrote: "an authentic community with school buses, college students, working families - instead of planned communities of look-alike houses. Quiet streets instead of congested mall parking lots, changing seasons rather than endless summers and a chance to stand out and be different rather than blend in with the other retirees...also a low-to-moderate cost of living."

Getting to know your new community begins with a history lesson.   Early North Carolina history recorded nearly 30 Native American groups across the state.  You can see their influence today in the names of North Carolina towns, rivers and counties - Waxhaw, Waccamaw, Catawba, Roanoke, Pamlico and Cape Fear to mention a few.

In 1524, Giovanni de Varrazano was the first European to visit North Carolina, Spanish colonist Lucan Vazquez de Ayllon landed at what is believed to have been the mouth of the Cape Fear River in 1526, and Hernando de Soto explored the southwestern part of the state in 1540.  These attempts to colonize failed.  Sir Walter Raleigh sent several ships to establish the first colony on Roanoke Island in 1584, but those colonists that survived  returned to England in 1586. John White led the second attempt to establish a colony at Roanoke in 1587.  White departed for England for supplies but when he returned to Roanoke in 1590, the colonists had disappeared and the word “CROATOAN” was found carved into a tree. Thus, the mystery of the Lost Colony was born.  In 1705, the first town in North Carolina was built – the Town of Bath, and in 1789 North Carolina becomes the 12th state of the United States of America.

Fast forward to the Civil War, where in 1861, the Confederate States of America reclaimed the old Brunswick Town site by building Fort Anderson, just one of the forts along the Cape Fear designed to protect the City of Wilmington.  Take a picnic lunch and visit Brunswick Town/Fort Anderson State Historic Site, 10 miles from Southport off Highway 133 North – 8884 St. Phillips Road in Winnabow.  Learn how Brunswick Town held a tea party 8 years prior to the Boston Tea Party, walk along the banks of the Cape Fear River and see the ruins of the St. Phillips church. 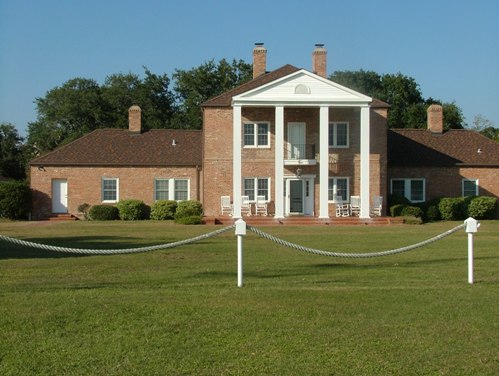 Meanwhile downstream of Brunswick Town, Fort Johnston was built between the years 1745 and 1754 on what is now the Southport Waterfront. The fort protected settlements upriver and provided quarantine service for mariners.  One section of the quarantine station is still visible from the Waterfront and the Fort has been converted into a Visitor Center, Southport History Museum and the N.C. Maritime Museum @ Southport.

In 1792, the General Assembly of North Carolina commissioned a small group of men, led by Joshua Potts to create the Town of Smithville a town surrounding Fort Johnston.  This town was named for Benjamin Smith, a representative in the NC House of Commons (1868 changed to N.C. House of Representatives) and later elected the 16th Governor of the State of North Carolina.

The town of Smithville became the seat of Brunswick County in 1808, and in 1887 the town’s name was changed to Southport in an effort to attract a major port. The port didn’t happen but the town grew.  In 1978, growth in the County caused the County Seat to move from Southport to a more central location in Bolivia.

The history lesson continues at the mouth of the Cape Fear River and Atlantic Ocean at Fort Caswell.  In 1826, Congress authorized the construction of a fort on Oak Island, named in 1833 for the first Governor of NC and Revolutionary War hero, Richard Caswell.   Fort Caswell changed hands four times during the Civil War and many soldiers died from diseases but no lives were lost to enemy fire during the period 1861-1865.  The Fort was in ruins after the Civil War and remained that way until funds were appropriated in 1896 to reconstruct the fort.  Fort Caswell was the headquarters of the Cape Fear Coastal Defenses in 1916 where it was used as an Army training camp during World War I.  There were no roads to Fort Caswell and it could only be accessed by water so in 1928, Fort Caswell was abandoned again as it was declared too isolated.  During World War II, Fort Caswell served as an army base and submarine lookout post.  Fort Caswell was deemed war surplus in 1946 and the Baptist State Convention of North Carolina purchased the 250 acre fort from the Government in 1949 for $86,000. Today North Carolina Baptist Assembly at Fort Caswell is a peaceful coastal retreat and conference center.

Want to learn more history on the area and state?  Attend one of the many seminars and lectures provided by Brunswick Town/Fort Anderson State Historic Site, N.C. Maritime Museum @ Southport or the Brunswick Civil War Round Table.  They will be posted on the Events section of this website.

For information about key products and services you will need to relocate look under Newcomer Information, Education, Employment, Healthcare, Helpful Resource Sites, Taxes and the Directory of Member Businesses.

About our Communities Area History